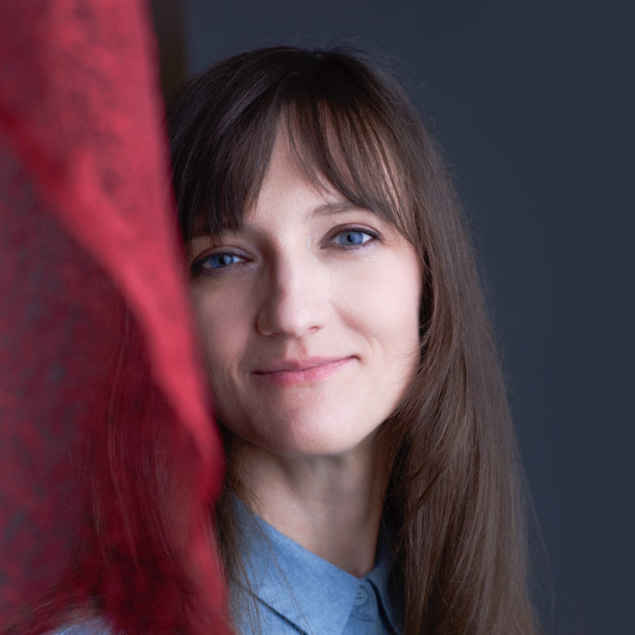 This month we are very happy to meet WIFTMI member Eliza Subotowicz. She is a filmmaker, a film festival programmer, a coordinator for industry events, a script analyst and a reader for companies, funds and labs. Here in Italy she is the co-founder of HerArts Film Lab, an international script development workshop for women filmmakers, and this is how our connection started.

Hi Eliza, what is HerArts and how and why HerArts came to life here in Italy?

HerArts is the name of a film lab and association founded by Gerry Guarino and myself this year in Italy with the aim to support and promote international female talent through script development workshops and by creating a worldwide community of women filmmakers who can help each other in this male-dominated film industry.

“HerArts” plays on the female pronoun and the name of Hera, the Greek goddess, whose temple is part of the magnificent complex of ancient ruins in the southern Italian city of Paestum – the home of our lab.

This area of Campania is where Gerry is from and where I am now based. Both Gerry and I have worked for the film industry and events for many years (we met working for a film festival in Doha, Qatar) and had dreamt for a while of building something of our own.

I am actually a filmmaker myself and have attended many development workshops. I also work as a script consultant.

The idea for a development lab came quite naturally to me. But we didn’t want to just organize another writing retreat and from the beginning intended to create something meaningful.

After doing some research I realized there aren’t many labs dedicated solely to women and when we bounced the idea off people in the industry we got a very positive response, so we decided to go ahead with it.

After completing two editions of the lab I can say with confidence that what we’ve created is a much-needed and important endeavor. 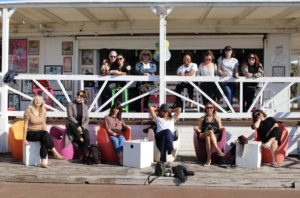 After two editions and many Herartists, what have you seen that they have in common and what were they looking for by enrolling in the lab?

The wonderful part of the lab is that the women come from all over the world – Europe, North and South America – and although they are of different nationalities, ethnicities, age and stages of their career during the lab they form a strong bond and the atmosphere is one of camaraderie and solidarity that has to do both with them being women and creators.

They come to us for different reasons: some are mothers who try to get away from the daily routine and throw themselves into intensive work on their projects; others come to workshop a story that has a women’s issue at its center (domestic abuse, miscarriage, etc.) or that deal with women’s relationships (mother-daughter, female friendship, etc.); some are at the beginning of their career and consider this a safe space to try things out and feel supported, others have a lot of experience but look for a community to work with on their scripts and stories, and HerArts provides them with just that.

Needless to say, a week in the beautiful region of Campania – near the sea and the ancient ruins, with lots of delicious food and drink is also appealing.

Azienda Seliano, the farmstay where the workshop is held, is a fantastic setting – peaceful, green, almost bucolic, full of history and stories.

The participants come out of our lab nourished in many ways.

Can you tell us something about the method(s) of the lab and the response(s) of the participants? And how good are you at hiding which is your favorite project?

We invite filmmakers with feature film and TV series projects at different stages of development. There are participants who workshop a treatment, others have an advanced draft. So the work is different for each project.

The week is structured so that the participants start and end with a short presentation of their projects in front of everybody.

This is important because we all – participants and mentors alike – partake in the development process of each project; the feedback-giving isn’t limited to the organized sessions but extends to conversations over coffee or dinner or a stroll to the town.

In subsequent days we split participants into groups to discuss the projects in depth and then hold one-to-one sessions with mentors. All participants have a chance to get feedback from each mentor, so that every participant gets comprehensive notes on their draft. There is then time to write and turn in assignments.

The final day is the presentation of the outcome of all this work – we’re able to see what has changed in the story and how the filmmakers talk about it. It’s very hard to rewrite a draft or even a treatment in a week but it’s possible to find the heart of your story or come up with a new outline or pitch. Of course, there’s work to be done after the workshop but the foundation is laid.

And then 2-3 months later we organize an online follow-up to see where everyone is at.

The participants of the first edition admitted that the deadline to submit updated materials also helped them in their process, which is otherwise a lonely one and easy to dismiss in one’s busy day-to-day.

The structure described above is a template but we also improvise along the way and are flexible if we feel something else is needed. Throughout the week we really try to create this atmosphere of mutual help and support and there’s never a feeling that one project is more important than the other.

Everyone cheers for everyone else and, in a way, we hold each other accountable for the others’ success.

This year Céline Sciamma met the participants online and we can imagine how exciting this must have been. Wild dreams: who would you like to invite in person to the Lab as a guest and why?

We were absolutely thrilled when Céline Sciamma confirmed her availability for an online Q&A.

However, as the communal aspect of the lab is so important we would like to focus on bringing the filmmakers physically to Paestum. In fact, we are hoping to have Céline with us next year, maybe even organize a retrospective of her work open to the public. It would be amazing to have her with us – talking, dining, strolling around the temples!

Céline is the leading female figure of not only European but international cinema landscape and each of her films is a new exploration of the female gaze, a learning curve for all of us. So this is actually already a dream-come-true in the making…

Otherwise we would of course love to host top female filmmakers working today: Jane Campion, Kelly Reichardt, Sofia Coppola, Greta Gerwig, Lynne Ramsay, Andrea Arnold, the list goes on… It would be amazing to learn from their experience and get inspired by hearing their stories of success.

We would also love to have more Italian talent present and hope to bring local filmmakers to Paestum as well.

What’s next for HerArts and for Eliza?

We will continue with our two labs a year – one in spring and one in fall. With two editions under our belt we hope to be able to look for funds and sponsors, so that we can make the lab available to those who can’t afford the fee and also to invite more guest speakers. We have approached local film festivals and hope to forge a collaboration with them. We are also looking at industry platforms to partner up with, so that we can give more visibility to our alums and their projects.

We want to keep working with our community of alums to help making the industry more open to women filmmakers, more aware of female-helmed and female-driven content, including new ways of storytelling. We are in fact in contact with another lab for women filmmakers (The Writers Lab) about connecting our respective groups of alums.

We also want to work more closely with the local film community. We are now in talks with the Campania Film Commission about doing something together: for example, organizing a development workshop for Campania filmmakers, inviting local producers to meet our international talent, or organizing a workshop for filmmakers interested in shooting their projects in Campania. The possibilities are endless and we look forward to this collaboration as, for obvious reasons, for us the Commission is a strategic partner. We were very happy indeed to have hosted Simona Monticelli, the executive coordinator at the Campania Film Commission, this past edition, who told us at length about their work and about the regional film industry. We hope this is just a beginning of a beautiful friendship.

As for me – I need to find time to work on my own projects! I joked with our participants that after our lab I need to find a residency to workshop my own script… When that happens, I know that I will now have a community of wonderful filmmakers and human beings to support me on my way as well.

Thank you, Eliza, and looking forward to meeting you again soon!

Eliza Subotowicz studied writing and directing at Columbia University film school in New York City. Her thesis short BEN was awarded by the Directors Guild of America. Her subsequent short MERCY traveled to around thirty festivals around the world (Palm Springs ShortFest, Melbourne IFF, Raindance and more) and received Best Short Award at Durban IFF. She is an alum of Berlinale Talents, MFI Script 2 Film, MIDPOINT Intensive, Cine Qua Non Lab, among others, and of script consulting training programs organized by Sources 2 and MIDPOINT Institute. She is currently working on her first feature film. Eliza has worked also as a film festival programmer, coordinator for industry events, script analyst and reader for companies, funds and labs including the Warsaw Film Festival (Poland), MIDPOINT Institute (Czech Republic) and Doha Film Institute (Qatar). She also teaches screenwriting at Łódź Film School in Poland. In 2022, she co-founded HerArts Film Lab, an international script development workshop for women filmmakers held in Italy where she holds the position of director.

This website uses cookies to improve your experience while you navigate through the website. Out of these, the cookies that are categorized as necessary are stored on your browser as they are essential for the working of basic functionalities of the website. We also use third-party cookies that help us analyze and understand how you use this website. These cookies will be stored in your browser only with your consent. You also have the option to opt-out of these cookies. But opting out of some of these cookies may affect your browsing experience.
Necessary Sempre abilitato
Necessary cookies are absolutely essential for the website to function properly. This category only includes cookies that ensures basic functionalities and security features of the website. These cookies do not store any personal information.
Non-necessary
Any cookies that may not be particularly necessary for the website to function and is used specifically to collect user personal data via analytics, ads, other embedded contents are termed as non-necessary cookies. It is mandatory to procure user consent prior to running these cookies on your website.
ACCETTA E SALVA