Looking for a Muse
– by Kissy Dugan 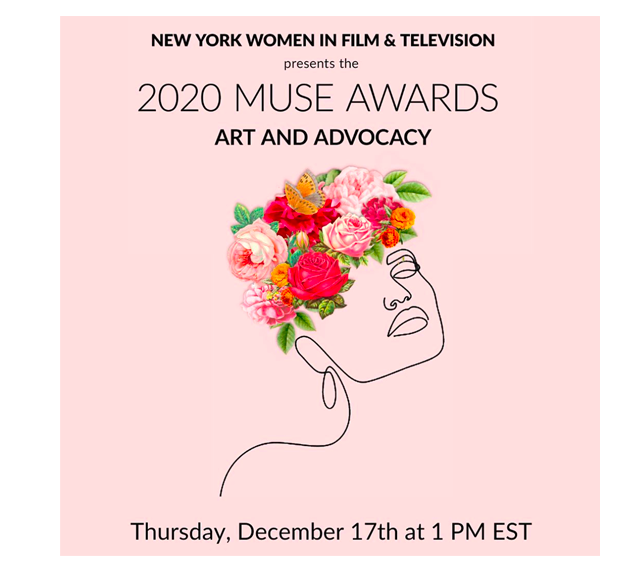 Despite the unprecedented challenges of 2020, on December 17, New York Women in Film and Television (NYWIFT) presented the 41st Annual Muse Awards with an online gathering to celebrate ART and ADVOCACY. The gala, which usually boasts attendants from every major studio, broadcaster and streamer, was created to celebrate women of vision and achievement. Its purpose; like any good muse, is to inspire.  And that it did.

While the list of honorees were impressive (Actors Awkwafina, Rachel Brosnahan, Rashida Jones and Ali Stroker, Director Gina Prince Bythewood, Pulitzer Prize Winning Journalists Jodi Kantor and Megan Twohey and President of Orion Pictures Alana Mayo), as a founding member of WiFT&M Italia, I was even more inspired by the journey that NYWIFT has taken to get to its 41st awards show.

Over four decades ago and only three years into its existence, NYWIFT held the first Muse Awards in a restaurant not far from my old stomping grounds in the West Village. They then consisted of 60 ‘ballbusting’ members fighting for their place at the table. Today they are 2,500 and they not only have a seat at the table… they set the table, choose the menu and invite others to take place at it. Today they are considered an industry powerhouse that offers a plethora of benefits; they’ve created Writer’s Labs, Film Funds, Sexual Harassment Hotlines and scholarships. This year, NYWIFT’s advocacy continued through COVID to provide its members unyielding support through various emergency resources, online programs and services and with the creation of the HIRE HER BACK initiative together with Women in Film Atlanta and WIF LA.

As WiFT&M Italia approaches its third ‘birthday,’ let NYWIFT’s 44-year path inspire all of us to work towards a more powerful, influential and connected Italian network.  NYWIFT’s current and continued success is in large part due to the relationships they have built. The following is a partial list of sponsors for this year’s Muse Awards:

To grow the number of the ‘ballbusting’ Italian professionals, WIFTM Italia should take a page from NYWIFT’s storybook and start setting our own table for more collaborative relationships with broadcasters, production companies, government institutions, industry decision makers and corporate sponsors.

In 2021, let’s use NYWIFT as our muse as we forge ahead to create partnerships for best practices, alliances for professional opportunities and initiatives for cultural change.