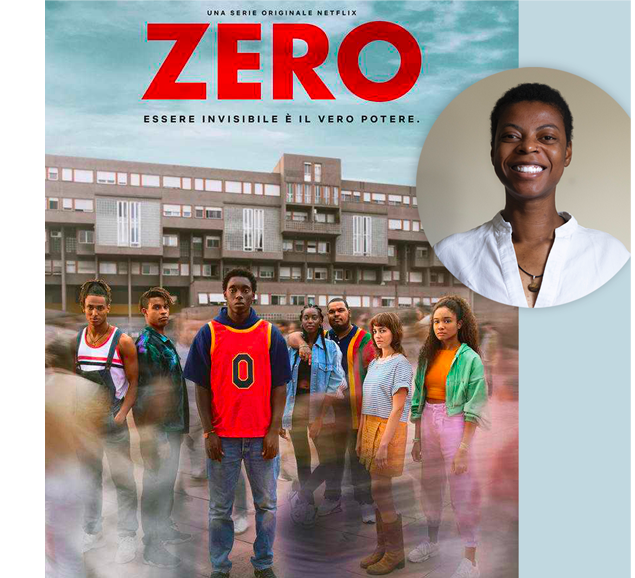 “You don’t quite fit in with the rest of the world!” My brother laughed.
And I feel proud of being outside the norm. A feeling I achieved with difficulty,
through conflicting emotions— which became a special characteristic of mine.
Now I treasure my brother’s sarcastic, yet surprisingly deep, comment received on a teen
summer eve.
I am proud to be Nicole. Female. Black. Italian. German. Haitian. I am. I exist.
Yet, the books read in school don’t mention me. I’ve flipped through several pages and
didn’t find myself.

I’ve seen movies with my friends, they were there; I wasn’t. I don’t want you to think that I am or feel alone. I am far from it— I am in good company.

Like myself, many other minorities appear in mainstream movies but only come through as
underdeveloped characters.

Now, at 26, for the first time in my life, I might start hoping to see more representation on Italian screens to give other minorities a sense of belonging denied for far too long.

Belonging and visibility are at the core of Zero’s narrative, the first Italian tv show with
a Black-Italian cast.

Omar (later named Zero), struggles to find himself in a society who either mistakes him for

someone he is not or does not notice him at all.

The notion of visibility lies in the immense power of feeling part of a group and being
able to share both positive and negative emotions among those who live similarly to one’s
own reality. We exist as individuals because we are justified by the group.

Like me, the main characters of Zero live in a society that fails to recognize their presence,

thus making them “invisible”. This imposed invisibility makes Zero a superhero as he transforms this negative experience, through the support of his group of friends, into a positive one that plays in their favour.

For the first time he and his friends feel seen. I believe that the continuous struggle of being a minority—in heritage, religion, culture, gender— instills grit and resilience, true superpowers.

I think the superhero genre works in Zero, but it also takes away from properly addressing the issues of social inequality, racism, how difficult it is for second-generation Italian to receive their Italian documents, and, in particular, from some character developments.

I would have liked to see more of Sara: She is the one of the group able to turn thought into action and teaches that power to the rest of the guys.

Before Omar/Zero becomes part of the group, she is the only one who established a safe space where she practices her passion: producing music.

She also is the only one without parents, an important detail not to be underestimated given that, among the many difficulties encountered by the other guys, is that of living with the rules dictated by their parents.

Rules linked to traditions of African descent that, in comparison with Italian life, struggle to stand.

We witness family members taking away documents or their children’s earnings by using their status.

For Omar and his group there seems to be no complete sense of belonging nor in society nor at home making the teenagers struggle to find balance between two contrasting realities.

Awa, Zero’s sister, takes over at the end of the series by becoming the center of the most
intriguing cliffhanger. She is the show stopper stealing the scene from her brother who,
ironically, seems to have permanently become invisible.

I hope to see the full story arcs of both Sara and Awa in the potential second season. I
dream of Zero marking the beginning of a more inclusive narrative that gives people like me
space on a platform that struggles with diversity.

This is only the beginning. There is much to achieve.

Zero’s production is of tremendous importance and will hopefully influence and push
Italian media to represent and bring more of the Italian-Black community and other minorities on Italian screens.

As the aspiring cinematographer that I am, watching a character like Sara— a young
career-focused woman— is of extreme importance.

Visual storytelling always fascinated me, driving me to go to an artistic high school with
a focus in Graphic Design.

I won a scholarship for sports and one for academics and studied film in the United States where I had the luck to get work experience in both Los Angeles and New York.

I continue to develop my camera and lighting knowledge because the idea of working as a
cinematographer intrigues me.

It’s a career that requires an ongoing process of evolution.
This is also how I see Zero.
Zero is not the destination but the beginning of an evolutionary process.

Translated from Italian by the author.
Curated by Correen Martinez.